ARSENAL target Houssem Aouar was sent off following a horror lunge during Lyon's clash with Montpellier on Tuesday night.

The French midfield star, 22, was ordered to take an early bath after launching himself studs first into the shin of Arnaud Souquet. 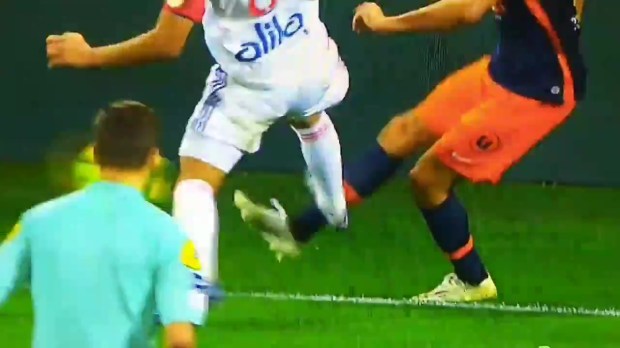 Aouar was initially shown a yellow card before it was upgraded to a red after VAR replays.

Montpellier took the lead in the 38th-minute thanks to a Teji Savanier penalty.

And, just five minutes later, Aouar took out his frustration on the shins of Souquet.

The in-demand Lyon skipper charged at his opponent and lunged in, studs-first - getting absolutely nowhere near the ball.

Aouar was shown a yellow card in the 44th minute before video replays conclusively proved the hack deserved a red.

Despite having made his debut five years ago, the dismissal was Aouar's first ever sending-off.

Savanier later scored his second to give Montpellier a 2-0 lead, before Memphis Depay scored a late consolation from the penalty spot following Vitorino Hilton's red card.

The 2-1 loss could now become Aouar's final game for Lyon - with Arsenal, Juventus and Manchester City interested in the midfielder.

The Gunners are thought to have made Aouar their No1 target - even ahead of Atletico Madrid ace Thomas Partey.

However, they may have to shell out £55million to sign the France Under-21s star, with the player believed to be keen on a move away.