NOW here’s a car that screams: Life is good.

It tells the world you have escaped the motoring mundane, there are no small humans in your life and you are successful. 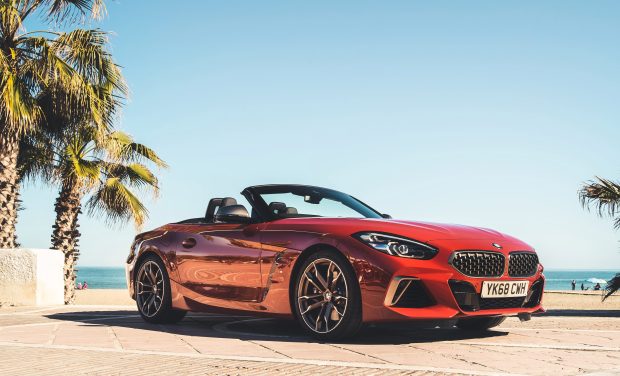 Make that very successful, as the entry-level BMW Z4 starts at a whisker under 37 grand and the high-performance six-cylinder M40i costs £49k.

No matter which engine you plump for, the Z4 looks the part – especially in M Sport spec complete with body kit, jet black grille and special alloys.

I like the sharp crease lines that cut into the long bonnet and the sculpted lower front spoiler with big air intakes alongside the snarling grille and sleek LED headlights.

The rear sits low and wide, adding to the Z4’s overall menace and drama. 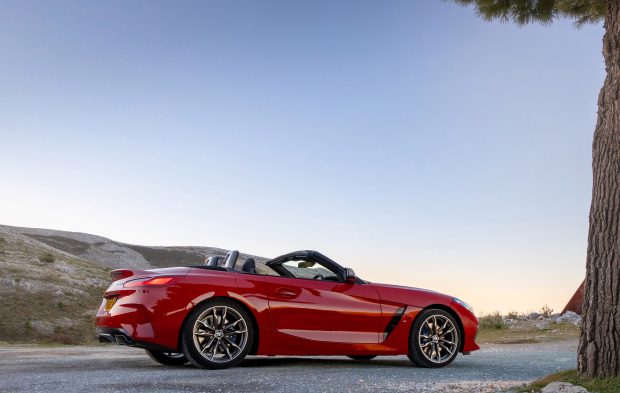 Two-seat open-topped sports cars tend to fit into two categories: Really fast ones for people who enjoy driving flat out, and poseur machines like the Z4 for those buyers wanting to cruise in style. Don’t get me wrong, you can have fun in the Z4.

It is agile and handles well enough, but the entry-level 2-litre I tested doesn’t have enough power to get you seriously excited.

But as the majority of buyers tend to be in their late 40s and early 50s, most of them are simply looking to enjoy cruising with the roof down for those three weeks a year when the sun gets out.

The Z4 will respond if you want to drive it hard but both the engine sound and performance will be a bit of an anti-climax . . . 0-62 mph in 6.6 seconds is not edge- of-the-seat stuff, though it will still put a smile on your face. The M40i cuts the 0-62mph sprint to 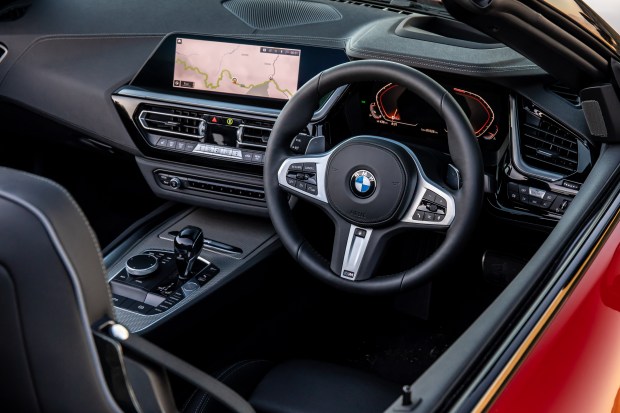 4.6 seconds and increases the heart rate and top speed slightly to 155 mph, but at a price.

Performance aside, the bonus of the 2-litre is fuel economy at a respectable 38mpg and CO2 emissions of just 138g/km. The cabin is smart, precise and clean BMW style, but travel light.

There is space for two adults and not much else, though you do get storage behind the seats and cup holders under the armrest.

That said, boot space is up 50 per cent compared to the old model at 281 litres for weekend bags.

If you are looking for raw roadster thrills and performance, the 2-litre Z4 will disappoint.

If, however, you want a soft-top cruiser with bags of style and image, it will do just fine.